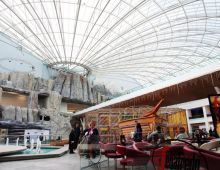 Moore Yaski Sivan (MYS) Architects designed an eye-catching sphere for Romania’s largest shopping mall. This 3D IMAX theater is created by the use of 29 “wrinkles” covered with twisted zinc panels which run from the top to the bottom.

The first 3D IMAX building in Bucharest is the eye-catcher of the large shopping mall. Bucharest, the economic and financial heart of Romania, is in a remarkable race to catch up to the rest of the European Union since they joined in 2007. The city’s strong economic growth has revitalized infrastructure and has led to the development of many shopping malls, modern residential towers, and high-rise office buildings.

The design of the IMAX building in Bucharest can be attributed to the Geode IMAX in Parc de la Villette in Paris. This building, made of highly illustrative stainless steel, was built using spherical triangles with an extremely refined finish. Similarities are also seen in the famous IMAX Glasgow Science Center. However, this IMAX differs both in its outer form as well as the materials used. The architect for the IMAX building in Bucharest envisioned an iconic building but was required to deal with a far lower budget compared to the stated examples.

In the early stages of design, Octatube was asked to become a part of the design team. The goal was to design a perfect sphere through the use of sheet metal panels out of which a new technical challenge was born. While engineers worked on developing potential surfaces, grid optimization, and double-bending, the designers took the opportunity to further exploit the properties and boundaries of the material. The outcome of this combined research was pitched to the architect as a free-form solution, minimizing the chance of disruptive oil-canning.

Moore Yaski Sivan (MYS) architects valued the importance of synergy between architectural ideas and technical feasibility in order to realize a new design within the boundary conditions. This resulted in an extensive study of materials, geometry, detailing, fabrication, and execution. Important feedback in this process came from the development of several scale models.

Initial Concept
Initial ideas for the IMAX Theater included a system of flat triangular aluminium plates placed on a geodesic space frame construction. A prototype based on the initial design was developed by a third party. Problems emerged in the overall fluency of the shape and its watertightness. It was decided by the architect and the main contractor to hire Octatube as a specialized company to redesign the sphere.

Divisions
A “eureka” moment in this project came when the collaborative design team of MYS and Octatube connected the diagonals in the triangular division to a “wrinkle” shaped solution.

Detailing
The outer shell is constructed from 25 km of cold-bent aluminium sections which create a fluent, double-curved sphere. At the perimeter of the “wrinkle,” lasercut wooden molds were installed to define the final “wrinkle” geometry. On top of these molds, a curved wooden layer is connected and covered with twisted zinc panels. The complete shell is supported by horizontally positioned hot-bent CHS sections.

Curvature & Mock-ups
The design challenge was to find an optimum balance between material characteristics, production techniques, and aesthetics for the “wrinkle” design. Eventually, each “wrinkle” was lifted 150 mm in order to emphasize the shape.
Trial and error was extremely important in the design process. After many iterations, five mock-ups were developed in order to fully understand the behavior of 0,7mm thin, twisted panels.

Completion
In December 2009, after months of design and construction using mathematical design and traditional materials, the IMAX Theater was complete. Altogether, the facade creates a dynamic view, best experienced when entering the new shopping mall.