Situated in the heart of Georgian Dublin, the National Gallery of Ireland is one of the most important cultural institutions in the country. The museum is a complex of buildings which consists of multiple wings. The oldest is the Dargan Wing dating from 1864. The Milltown Wing was added in 1903, the Beit Wing in 1968 and the Millennium Wing in 2001. One of the features of the refurbishment project launched hereupon was the renewal of all roof lights. Together with the replacement of the laylight glazing this created a new and sophisticated ´daylight system´. In addition, all historic buildings meet the international requierements of modern times while the museum´s routing is improved significantly. The re-opening of the museum took place in June 2017.

The architectural office Heneghan Peng made natural light one of the central themes in their design. Octatube contributed largely to this theme by realizing the various roof lights and laylight glazing. The prestigious project was initiated by the Office of Public Works and has had two phases so far. In the first phase Octatube was hired by main contractor PJ Hegarty & Sons and for the project’s extensive second phase, Octatube was contracted by John Paul Construction as design and build specialist for the steel and glass roof structures. All roof lights have a distinctive architectural language of their own.

Unique about the natural light conditions in the museum galleries is the fact that they always reflect the weather conditions outside in Dublin. Daylight is controlled yet its changes and variabilities remain visible. This has been made possible by calculating the lux levels cumulatively over the course of a year rather than retaining absolute values on the walls over time. In the Milltown Wing and Dargan Wing this is achieved by incorporating micro-louvres in the double glass units. These small lamellae eliminate direct sunlight and minimise the UV transmittance. Simultaneously the glass coating with a g-value of 0.14 significantly reduces solar gains and heat transfer. To provide the desired diffuse light for the paintings, the wings are featured with bespoke translucent laylight glazing.

For the Merrion Entrance and the Dargan Wing, the new glass roofs have been realized as an addition to the existing timber roof structure and 19th century ironwork.

The showpiece and focal point of the museum is situated at what was previously an unoccupied courtyard. It now serves as an exhibition space for sculptures, bringing in an abundance of natural light. Multiple historic windows that were hidden behind brickwork for decades have been reinstated, providing additional light and orientation in the adjacent galleries. The Sculpture Court’s glass roof is supported by glass beams, and here as well the benefits of a bespoke glass product have been employed. The middle strip of the all-glass roof is provided with reflecting metal inserts in the cavity of the glass. Artificial light is pointed to the reflectors enabling additional light into the funnel-shaped courtyard space. 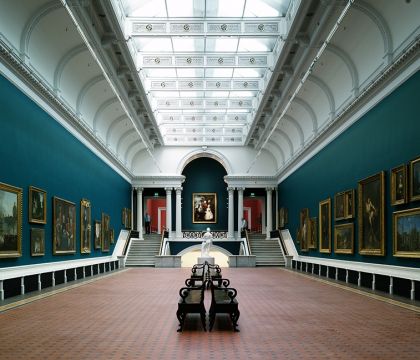 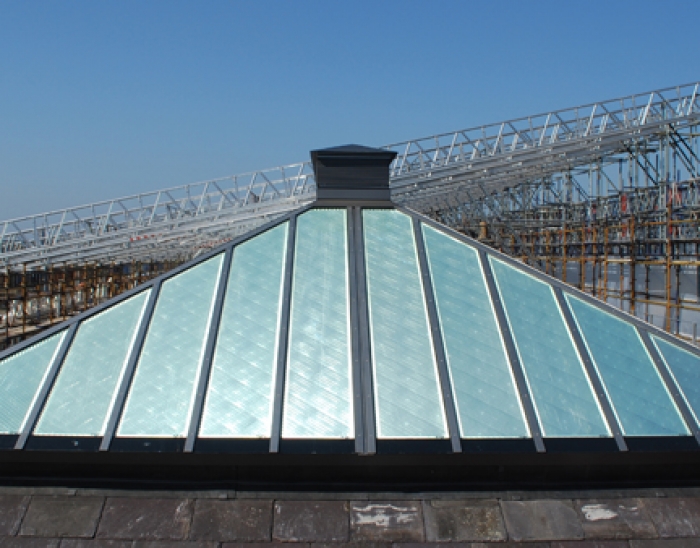 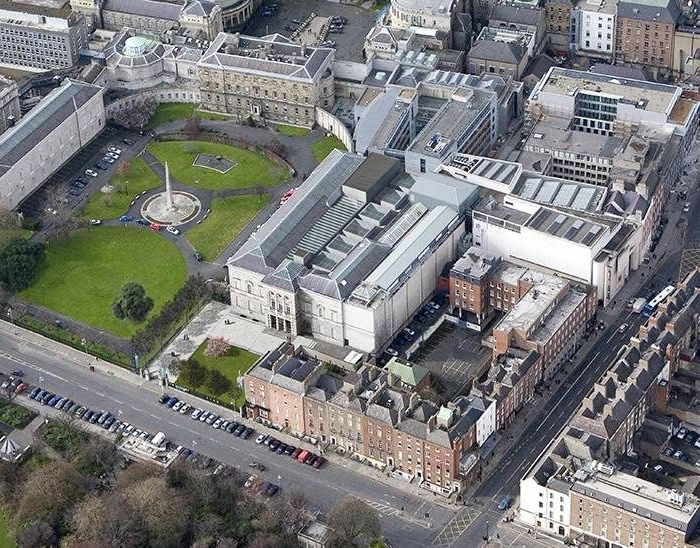 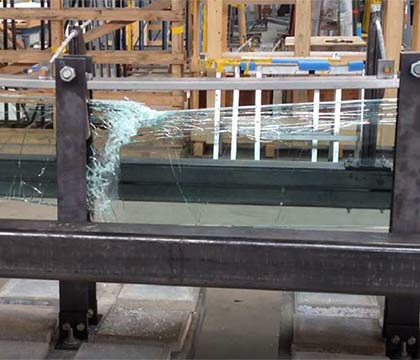