Icon
The Curve, an office building in Amsterdam is a new landmark in the harbor area of Amsterdam. The asymmetrical stand alone building is transparent and has slanting walls combined with an elliptical floor plan. Thus it contrasts with the block-like rectangular surrounding buildings. The parking lots around the building make the building stand out as a freestanding volume and a point of recognition.

The metaphorical connecting of the building and the northern harbor area in Amsterdam is the resemblance of a giant glass chimney seen on ocean tugs. The round shape is both autonomous and introvert and may function as beacon of light and activity on the site, while being an office.
A new area has dawn, with a new appeal and atmosphere, after decades of decline in the harbor activities and the old shipbuilding industry. The long ‘Kraanspoor’ project and the Curve: both are marking the new 21th century office activities.
With large open floor plans divided over six storeys, the building is a spacious office. A full structural glass façade provides a highly transparent building, such as Mies van der Rohe had designed as visionary in Berlin (Friedrichstrasse, 1919), but now adjusted to all present demands of indoor climate and sustainability. The building has a modern and sophisticated appearance.

The Curve has an elliptical footprint of 54 by 26 meters. The volume runs upward as a sloping elliptical cone to a height of over 26 meters.
The main carcass of the building consists of reinforced concrete floors and diagonally poured concrete columns in different directions. The construction of the facades is made of hollow elliptical steel tubes parallel to the glass façade. The floor-to-floor glass panels are secured to the concrete floor edges by means of stainless steel fixation structure with clamping plates.
For this project Octatube has acted as specialist subcontractor and has as such been responsible for the engineering, production and assembly of the glass facades. Furthermore, the 3D-model of Octatube has been used to determine the concrete contours, the connections of different elements and dimensions for all suppliers.

Form complexity
The shape of the building is determined by an ellipse on the top side of the building and an asymmetrical ellipse on the ground floor. The columns and storey high glass panels in between are straight lines.
The architect Ed Veenendaal proposed a fully glazed façade in response to all sustainability requirements. The resulting triple-glass panels had to span up to 5 meters in length due to the inclined positions. Those extra large and heavy panels had to be dimensioned with extreme caution. Because of the geometry all glass panels have unique forms.
A major challenge in the technical design of the facades was to control the form complexity. This has been done with the use of a BIM-model on the one hand, and by carefully detailing the individual glass panels and connections to the load bearing construction of the building on the other hand. An important method to tackle these issues was parametric engineering. First a design principle was constructed, with varying components depending on the angle in the vertical direction and the connecting glass panels in horizontal direction. This resulted in the efficient detailing of a principle which could then be engineered as various details dependant on the position. This method also saved a lot of time and effort during assembly.
A good example of the engineering with parameters is the following: 54 different brackets at each floor’s perimeter that could be developed based on one model. The brackets consist of 3 planes adjustable to the right XY-, XZ- and YZ-coordinates. Because of a numerical input of these parameters each detail could easily be adjusted to the different positions.
The 3 laser cut planes of the bracket were designed in such a way that they could be slit together and then welded. This way a multitude of custom elements have been produced efficiently. Furthermore the detail is 60 minutes fire-proof.
The 3D-model of Octatube has been used to adjust different building parts. This (mini) BIM engineering method makes it a lot easier to develop, build and maintain an integrated design. Also, construction mistakes and failures are minimized.

Glass facade
The elliptical tubes of the façade construction fit the shape of the building’s floor plans and also ensure maximum transparency because they are slender in their cross section and rigid in their longitudinal section. The angular center point of the glass connections is visually aligned with the section of the long axis of the elliptical tube. The molded stainless steel clamping construction carries the enormous glass weights. Some glass panels are heavier than 1000 kilograms and longer than 4500 millimeters. The glass is structurally fixed while the mullions are kept separate from the facade. This makes the façade even more transparent.
The clamping plates securing the glass give an extra rhythm to the exterior view and are deliberately constructed that way.
A challenge in the choice of glass was the difference in tint that could occur between the façade glazing and the glass raised above the roof. The optical effect of seeing through the building had to be unambiguous.
After an extensive sample trajectory a comparison between different glass types and coatings led to a successful result.

The composition of the glass has a double cavity (triple glass) and consists of 5 panes. The inner and outer glass panels are laminated and the middle panel is monolithic. This specific composition of the glass is also able to function as fire curtain, as Octatube has learned from the City Hall in Alphen aan de Rijn project, where even a thinner composition functioned the same way.
A special principle has been engineered to guarantee a continuous width of all silicon seals. This gives the building an additional sophisticated look.

Construction preparations and assembly
For the construction of the facades different digital models had been established and in addition a full scale mock-up. These models have been used to test the principle of the brackets and the finishing with angled metal profiling.
To allow for an optimal duration and assembly time the construction of the ‘hat’, the upper structural steel ring has been built up in the factory in advance, in order to check all connections and dimensions. Subsequently, galvanizing and powder coating took place. Initially, the idea was to hoist this part onto the building as a whole, including the glass panels. In the end it was decided not to due to the fragility of the glass, the heavy weight and the relatively large required strength as the crown would had been hoisted as one piece.

Measuring has been a key factor of success, since the positions of the façade brackets were plotted at the same time as the position of the concrete columns. This way it was possible to work with minimal tolerances and assembly-workers could highly benefit from it while they were putting the large glass panels in place, sometimes with strong winds. With diagonal bands the center of gravity has been determined for the purpose of lifting. With a special glass carrying device all panels could be tilted in their correct positions.

Future proof building
The technical design and the application of high-quality triple insulated glass units with argon filled cavities and solar coating establish an U-value of only 0.6 W/m²K, which is highly energy efficient. This exceeds current building standards and makes the building ready for the next decade.
The collaboration between the client, main contractor and Octatube has been both professional and confidential. All stakeholders are satisfied with the building process and the final result. 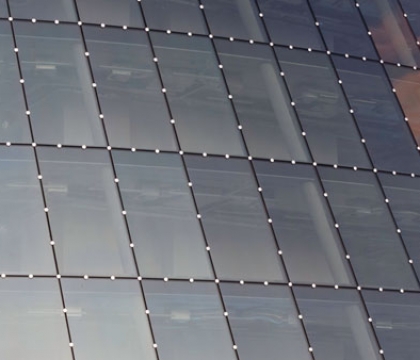