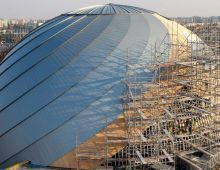 M.Y.S. Architects designed the Cotroceni Park Shopping center, a new multi-story shopping and entertainment complex in the center of Bucharest. The atrium, designed to be the main attraction of the mall, is an indoor space with a large frame skylight enclosure designed to give full view at maximum height of 27 meters above the finished floor.

The center of the shopping mall is a half-circular atrium measuring 53 x 106 meters, serving as an exception to the orthogonal reinforced concrete structural grid of the building.
Architect Yaski from Tel Aviv wished the atrium ceiling to be the spatial focal point of the mall. During the design process, various possibilities were discussed and designed. Since Romania suffers from frequent earthquakes, the reinforced concrete grid structure was intentionally designed to look majestic. The steel structure of the roof was designed with the ability to move horizontally on sliding Teflon support plates.
The maximum height allowed by the Romanian government is 25 m. The 53 m span was shortened to 46 m at the central crown, a strong and dense supporting tubular canopy, fixed to the reinforced concrete grid structure by large guying elements. The heavily loaded crown supports the 20 flat, radial trusses in the center of the roof while the semi-circular perimeter supports the free, sliding footings of the trusses.

Crown
The crown carries half of the forces of the roof directly to the foundation. With its eccentric supports and the local earthquake and snow loads, this element proves itself as the central crown.

Integrated Solution
The involvement of Octatube in the development of the central atrium of the shopping mall was extensive. Several design schemes were proposed to architect Alon Yitzakhi, varying from industrial and cost-efficient to more sophisticated designs. The chosen layout became a radial array of linear trusses. This design proposal was optimized and produced by Octatube in collaboration with several subcontractors. The shape of each truss is derived from form-finding FEM analysis that optimizes the substructure. There is no symmetry among the trusses, which were transported to the site as complete packages.

Only a small part of the construction has been assembled on site whereas all elements were prefabricated. Only 100 field welds have been executed on site.

Here you can watch a live webcam in the big atrium space.