On Martin-Luther-Platz, in the centre of Düsseldorf, Octatube has built a striking two-layer pavilion with a roof terrace.

The pavilion with orange-brown corten steel and arches is based on the colour scheme of St. John's Church and the historical facade of the adjoining exclusive shopping mall; Schadow Arkaden. The inner layer of the facade construction is a transparent glass curtain wall façade. The second skin facade consists of perforated corten steel which a sun protection function. Both the second floor and the roof of the construction are supported by five solid wooden wall slabs constructed by the main contractor.

The interior of the ground floor is about eight metres in height. It is characterised by a great deal of transparency and clarity. From here you can take the elevator to the roof terrace. The large glass surfaces and a multitude of sunsails on the roof make the building a spectacular project. The architectural design was made by Molestina Architekten.

The architect Juan Pablo Molestina says about the design: "Guests can look out through the perforated steel and in the evening the light shines out, just like a lantern. The planning requirements were very special: the almost triangular building is a solid wood supporting structure, which had to be built directly on a tunnel in a slightly curved shape." (Source: www.rp-online.de)

It is remarkable that the whole facade has a wooden support structure. Load-bearing structures for a building of this size are usually made of steel. The wood (cross laminated timber) is clearly visible and creates a warm atmosphere. Steel columns with aluminium profiles for the glazing system have been build around the supporting structure. Steel carriers are attached to the steel columns from which the corten sheets have been suspended. Corten rusts naturally. This has consequently been taken into account in the engineering phase. Plastic plates are attached between all connections with normal steel so that the different types of steel do not touch each other. Octatube has been hired as a facade specialist because it is a combination of two facades and we were able to realize both them.

The pavilion houses a gastronomic newcomer, Wilma Wunder. Depending on the time of day, Wilma turns into a café, bistro, restaurant and bar. A nice addition to the already attractive Düsseldorf! 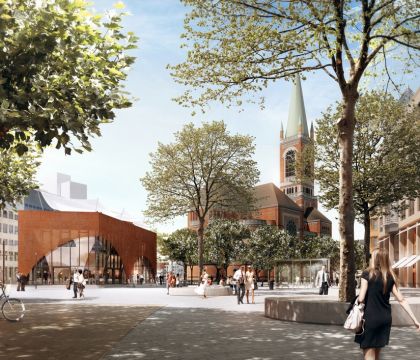