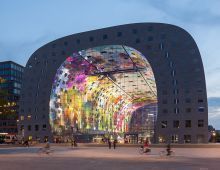 Facade INHolland Delft
Innovation was the driving force behind the development of the world’s thinnest glass facade at the INHolland School of Applied Sciences in Delft. Among the innovative practices are the combination of prestressed aramid cables, hi-tech composite materials, and construction through the cavity of the insulated glass panels. This experimental project could only be realized due to exceptional synergy between design and build partners.

All glass facades for larger spans need stabilizing systems for wind and deadweight loadings. Pretensioned glass façades accentuate lightness and maximum transparency due to minimal usage of obstructing profiles. In an experimental process a system was selected in which pre-stressed cables were developed for taking up horizontal wind forces while deadweight suspension rods would take up the vertical deadweight of the system. The initial conceptual idea of architect Rijk Rietveld was elaborated through different design brainstorms towards a radical innovation for a super slender glass façade.
The façade is exposed to deflections up to 300mm at windy days. With a height of almost 14 meters, the façade proves itself therefore a spectacular structure and eye catcher of the building.

3 Innovations
Prestressed Structural Concept
The structural concept of this project differs from regular prestressed facades in that it is built around a free construction. Structural forces are carried downward to one point in the floor. These forces are sizable due to the room located in the upper part of the structure in addition to the exposure to the forces of the prestressed facade. These conditions proved to be great challenges for the design team.
The cables have been prestressed by means of hydrology. The preconditions of the structure made it necessary to stress the complete set of cable at one time to 40 kN each.

Hi Tech Materials
The tension cables in the facade are made from aramid. Aramid is widely used in yacht design in the maritime sector. The cables have been extensively tested under supervision by Octatube.
The dutch INHolland ‘Composietenlab’, an institution specializing in experimenting with composites, proposed and tested the special tubes inside the cavity of the glass panels. The preconditions of this project resulted in the choice for composite tubes with 50% higher stiffness than steel.

Detailling In A Small Space
The prestressed cable passes through spacers in the glass panels. Research and development to realize this design innovation was complex and extensive. After several tests involving panel size, details, and material suggestions, Octatube proposed design alternatives to the architect. The decisions of the architect resulted in more specific detailing that required additional testing by Octatube. This iterative process ultimately resulted in the optimal design for this specific project.

Prototype Development
A prototype has been designed and produced in the factory of Octatube in Delft. One of the critical elements was the frame of the glass panels. New panels have been developed in cooperation with the glass manufacturer to achieve a suitable solution.
After completion of the prototype, several aspects of the procedure, such as tolerances and production steps, were optimized.

Rijk Rietveld Architects
The new building is a combination of the work of architect Rijk Rietveld and the vision of client INHolland Polytech who aimed for a highly innovative glass facade. The project was realized by a diverse team of institutions and companies, each bringing specific knowledge to the process.
The Composietenlab and Prince Fibre Tech supervised the fabrication of the composites tubes; the cables were developed by Phillystran; and the glass panels were manufactured by AGC Westland. Octatube, with its facade experience and design/build knowledge, was responsible for process control. Throughout the process, Octatube integrated state-of-the-art knowledge from the faculties of Aeropace Engineering and Architecture from Delft University of Technology. The resulting thin glass facade, free from visible construction elements aside from the glass panels, illustrates the immense capability of a strong team of building partners.
Vast knowledge was gained during the development of the facade, however, transfer of that knowledge is still continuing. The facade is currently monitored by sensors that track movements due to wind loads, pressure in the cavity, and vapor. This information will serve to improve the system for the future.

The project has won the Glass Innovation Award in 2010 and in 2012 the project has been nominated for the Building Technology Award, of which a short video has been made (see below). 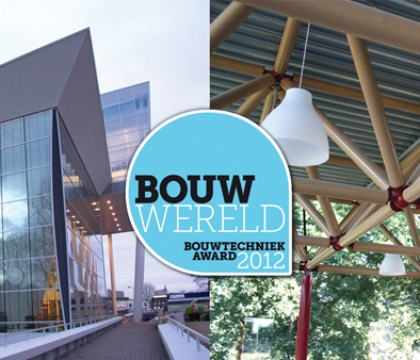 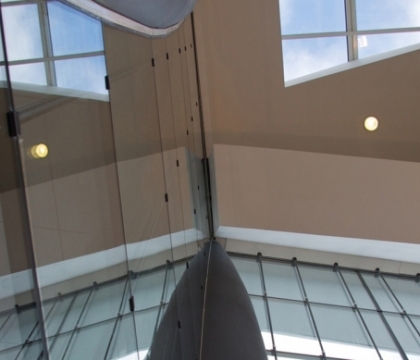 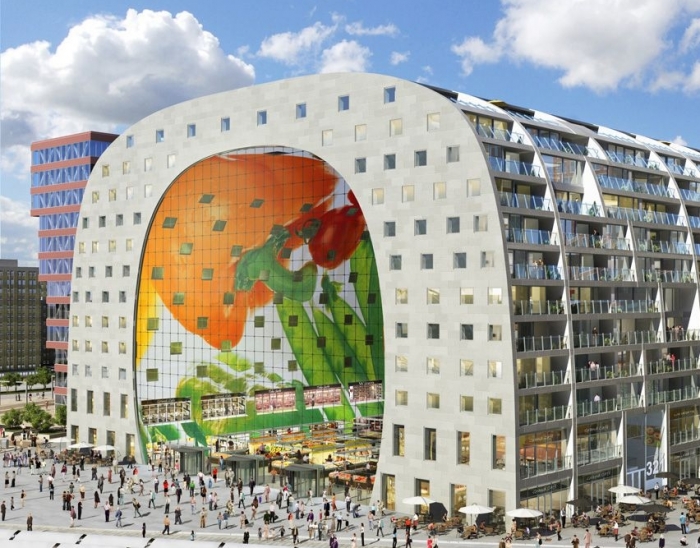